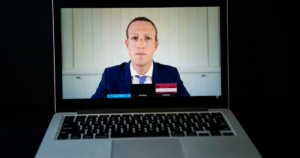 Turns out at least one major marketing expert agrees with what the plebeian public already knows — Mark Zuckerberg may not be able to pull off this Metaverse thing.

On a new podcast with Kara Swisher, renowned NYU marketing professor Scott Galloway laid the cards on the table. While he gave Zuckerberg credit for being a “visionary” who’s doing the right things to try and pivot a sinking ship — aka Meta-formerly-known-as-Facebook, which is now losing active users for the first time ever — but he’s not convinced that its Metaverse is headed in the right direction.

“If he pulls it off, it’ll be one of the most impressive feats in — not even corporate renewal — but vision around maintaining growth,” Galloway said during the podcast. “I don’t think they’re going to. I think this thing is already a giant flaming bag of shit.”

Part of Zuckerberg’s problem, according to Galloway, is that Meta’s Quest headset, previously known as Oculus, is still way too clunky to impress Meta’s target audience.

“The people in this universe are not impressed with the universe he envisions, and specifically the portal,” Galloway said on the podcast. “One of my predictions in November of 2021… was that the biggest failure in tech-product history might be the Oculus.”

There’s also the issue of spending. Zuckerberg sank $10 billion into the Reality Labs division, only to see company stock prices dip by more than 20 percent this week. Galloway says that with public opinion of Meta so low, there’s little hope the company can recoup its investment.

Of course, Galloway could totally be wrong.

Meta could find its killer app and make the Metaverse and VR attractive to new users. But if it’s going to pull it off, it’s got its work cut out — and stamping out sexual harassment, crappy user experience, and above call finding a compelling raison d’être are all going to need to become top priorities.